Your bag has been updated

Our first year delivering into The Championships was in 1978. Prior to us supplying, all the confectionery was made in a bakery underneath The Cumberland Hotel in London. When this bakery closed in 1978 we took on the task of producing freshly baked confectionery products into the Tennis Championships, and have done so every year since. This too is also a special year for us as it is our 40th year of supplying the Championships. We calculated last year, that at some point during the 2017 Championship we delivered the 3 millionth Scone, since starting supplying 40 years ago!

We have always been proud to be part of delivering a quality service and product into what is one of the most prestigious catered sporting events. The superb quality and organisation of this event has always, without exception, been second to none.

The processing is key to making the scones well risen and round in shape. All the ingredients are kept cool. Mixing time is critical. Each batch is mixed for 6 minutes. The dough is then allowed to relax, before being rolled out to a certain depth.

Again there is a short time for the sheet of dough to relax before the scones are individually hand cut out. The scones have to be placed evenly onto baking trays to allow an even bake. The tops of each scone is egg washed. The egg wash is allowed to dry, and then a second application is made before being baked in a hot oven. The double egg wash gives the scones a rich golden brown colour. Again baking time and temperature is critical to allow the scones to rise evenly. The perfect scone should have a brown base, golden brown top but the sides to be pale.

The type of cake made for Novak Djokovic was a gluten free Victoria sponge cake with jam and butter cream. It was in the shape of No. 1. Obviously for winning the Championship and being ranked No 1. It was decorated in red, blue and white to represent the Serbian national flag along with the letters ATP (Association of Tennis Professionals). Novak posted on his personal Facebook page that it was the best cake he had ever had! He has had several now. 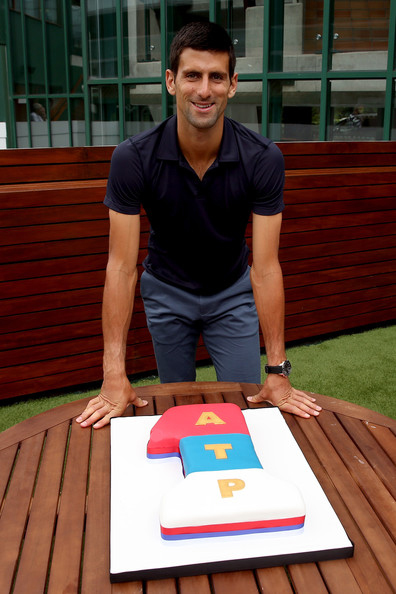 Again this was a Victoria Sponge Cake.

In addition to the celebration cakes and Scones we also supply Wimbledon Championships with Traditional rich fruit cake and afternoon tea pastries.

We have a dedicated team of 8 bakers and confectioners making the Scones and Confectionery products throughout the Championship. The same team has been with us for many years, most of them decades. A team of 4 packers and a dedicated delivery man who has also delivered into the championships for the last 20 years.